Lift-Off for Largest Prototype Company in the Nordics

When Prototal bought toolmaker Premould in the spring of 2018, they needed to move the acquired company’s workshop and storage lift to Jönköping. This turned out to have some unexpectedly positive side effects and one lift swiftly became several.

Prototal is the Nordic market leader in tooling with injection molding. The large tools and molds used for manufacturing can, however, be quite difficult to store, and to move to and from the workshop. Weland Solutions turned out to be just the solution they needed.

– With our machines, Prototal no longer need to use a truck every time they want to change a certain tool, instead all they need is a crane and a cart, Daniel Cantoni, Key Account Manager at Weland Solutions explains.

From 1 to 6 Storage Lifts

It all started when Premould’s old storage lift, a Compact Lift 2440, needed to be moved to the workshop in Jönköping. The project team quickly saw that the lift would be too tall for the new hall, so Weland offered to repurchase it and build a new lift on-site.

– Prototal already had housing issues though and during our discussions they realized that they could store a lot of their equipment in our types of storage lifts. We investigated it together and they ended up buying six machines last fall. Around Christmas they called us again and wanted an additional four lifts, Daniel relates.

The first three storage lifts were about six meters tall in order to fit under the new ceiling. An additional overview, however, revealed that there were spaces in the hall with higher ceilings, so the next three lifts were ordered eight meters tall instead. The work was done stagewise with two storage lifts built and filled at a time.

– The whole job took about a month. We also did a reshuffle and changed around the locations of a shorter and a taller lift. It’s important to be flexible and to solve problems as the client requires. We always try to accommodate their wishes, Daniel says.

The custom-made Compact Lift storage lifts store a total of 12.5 tons of material, distributed over about 25 trays. The trays measure 2440×820 millimeter, with a store height of up to 500 millimeters and a max load of 500 kilos. The solution saved Prototal about 300 square meters of floorspace.

Each tray ejects all the way out which makes it possible for an overhead crane to pick the stored material directly. The pick work had thus become both simpler and more efficient. 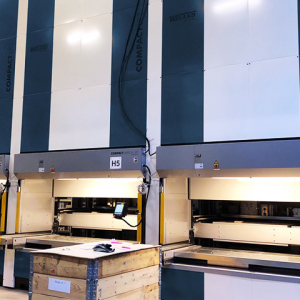