Hub for the whole of Scandinavia

The partnership with Volkswagen began back in 2004. – The spare parts warehouse was located in Södertälje in those days. However, the expansion of the business drove the need to increase storage capacity and a brand new spare parts facility was built in Nykvarn. This would serve as a hub for the whole of Scandinavia. Weland was entrusted with supplying space-efficient vertical storage lifts with a high picking speed because the client wanted the maximum storage capacity possible in the least possible amount of space.

Ten years on, Volkswagen Parts Logistics is now one of Scandinavia’s largest vertical storage lift facilities. – This massive facility houses 54 Compact Twin automated pickers and three Compact Lifts, which are high-grade, customised, fully-automated buffer systems that are designed for unmanned operation. The buffer systems make it possible to keep an order open all day and fill it as needed, and still have it delivered the next day. 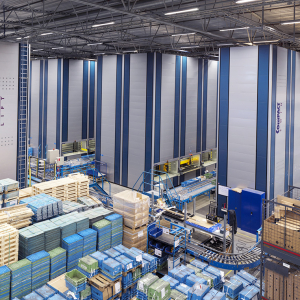